Though I love a good story, I am drawn to fiction with strong, likeable characters.
How does a writer accomplish this?
There are hundreds of books on characterization, and I have studied quite a few excellent ones, but I have discovered an answer in the most unlikely place – the science of cognitive psychology.  I use a simple heuristic that was developed in 1955 to explain how a person presents himself and interacts with others. It is called the Johari window.
It looks like this - 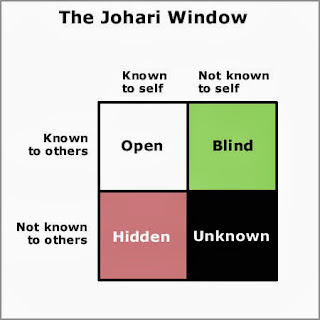 Each quadrant is called a window and it studies the human being from four different perspectives.
How persons represent themselves to others is called the Open Window. It is how they dress, act, and react. This is how they want to be perceived.

It sometimes differs from how others see them. In the Blind Window, the person is unaware that others might judge them differently than how they presented themselves.
In the Hidden Window, they keep things to themselves they do not want others to know or that only very few might know but are not allowed to share with others. Sometimes they might not even acknowledge some of these inner conflicts to themselves.
The fourth window, the Unknown, lies the unforeseen future. It might happen in the immediate future or it might lie far ahead, but everyone eventually encounters a test or a crossroad, and they will have to respond employing the traits displayed in any or all the other windows.
I owe my gratitude and my apologies to Drs. Joseph Luft and Harrington Ingham since I took their heuristic and adapted it for my own use - to create fictional characters.
I use a five by eight index card (for its convenience and its size), and I divide one side into four equal squares, imitating the Johari graphic model. I use one card for each character I am developing and I fill in each square to flesh out my characters and their story. (I use the back side to keep additional notes on the character – dates, plot points, details, etc.)
I start with the Hidden Self quadrant because this square houses the inner conflict and drives all the others. I explore the character's secrets, fears, - anything that the character keeps hidden from others.  This is the vulnerable side of the character and drives all the other squares. It contains the story.

The “hidden self” will influence how the character dresses, how they act, how they react to others. Like a mannequin in a store window or an actor in a movie, I dress the character and place them in the Open Window.

I look for some qualities that might be easily misinterpreted or misconceived and will fit in both the Open and in the Blind Window.  For example, a person who has a traumatic past (hidden self) will dress and act a certain way either to deflect attention or put on a false bravado (open self), but others might misinterpret the character as cold or distant (blind self) since they do not know the person’s hidden past.
By filling in the Johari, the character becomes rounded and solid – a realistic person who stands out from the others and draws attention from the reader.

He/she is now ready to face the Unknown.


The Unknown quadrant houses the outer conflict, the quest, the challenge. The character will respond based on the traits the author developed in the other three quadrants, but especially those in the Hidden Self where the inner conflict and the character's story lie. This conflict will test the character’s resolve, and it is how he/she responds that the author has created a satisfactory story with realistic characters and a believable resolution.

Popular posts from this blog

February 04, 2013
I gave myself a very special birthday present this year – I had surgery. Before you think it was to increase, decrease, or “lift” something, let me tell you it was not cosmetic (though I could probably use a few nips and tucks at my age; the infinite number of creams I buy OTC are not working their promised magic). About four or five months ago, I discovered a hard lump about the size of a large marble in my left armpit.  I had been feeling small pangs of pain in my left chest for several months, but I figured it was just my turn to dance with heart disease.  Everyone in my immediate family is diabetic and suffers from strokes or heart attacks, so I thought – here we go; my turn. I was going to tell my internist about the pangs during my next visit, so imagine my surprise when I discovered the lump. The Drama Queen in me immediately manifested herself – cancer, I thought.  I have cancer. I searched some more and found that the texture on the left side of my left breast felt diffe
9 comments
Read more

April 25, 2011
I stink at dating – always have.   I sputter.   I hyperventilate.   I fail miserably every time. I blame a pathetically underdeveloped gene that got little use before I married in my early twenties, then atrophied, gathering dust and rust, until I became single again in my fifties.   I decided to use this defect to my advantage when I needed to do some investigative reporting a few years back.   While on a newspaper writing assignment on Boomer-aged dating, I sacrificed my dignity and my vanity for the sake of the story (and I got several). Thank goodness, HoneyBunch saved me from all this when we married.  (He comes up with the best dates.) I’ve decided I will “show you mine if you show me yours.”   I will swap dating horror stories with you, but you have to promise to play along. The trick here is to tell about your worst date in 25 words or less.   You must keep it clean and you cannot name names. Our little contest will run only this week and before my next blogger posting.   Me
8 comments
Read more

November 12, 2012
Twenty five years ago my first husband and I bought a new home with four bedrooms and three baths, but my favorite part of the house was the enormous room you walked into from the front door. It had no dividing wall but the design was to use half of it as a formal living and the other half as a formal dining. From the beginning I decided to make it into one huge dining room that would catch the eye when everyone walked in through the front door of my home.   My three children were very young, but I envisioned them grown and married. We counted five at the time, but one day we would grow to eight, maybe more if we factored in grandchildren, so I bought a table that sat a family of twelve.  My husband thought it silly to look that far ahead and convinced me to buy only ten chairs. The room looked magnificent – the long, majestic table, the ten chairs, the buffet, a couple of real ficus, and a few other nice pieces of furniture – I was pleased. The table lasted longer than t
6 comments
Read more